Uncle Ed; my sister Nita; Me; Dad (c. 1946). This is the only photo I have that shows the house on Coronado Avenue, Stockton, California.

The house in the photo above is where I lived a major part of my childhood. My family moved there the fall of 1942; we moved away in June 1949. I was four when we moved in, eleven when we moved out. I had finished 6th grade at Woodrow Wilson Elementary and would have entered junior high school if we’d stayed in Stockton.

It was an almost new house when we moved in, the large lot bare except for a  patch of clover lawn right in front of the house. My dad borrowed a tractor, plowed the bare land, worked in a load of aged manure, planted eight widely spaced young walnut trees, then seeded the smoothed soil with blue grass. He was then done. Dad’s background was farming, not landscaping. Mom, too, had grown up on a farm, and her first priority in the yard was to put in a big vegetable garden at the back to the lot. She planted some sweet peas and zinnias near the house, but the house continued to look rather naked the whole time we lived there.

However, Coronado Avenue had a second act after we moved out, a second Willems’ family chapter, a chapter that did not go into my book, Child Bride. That book followed my immediate family—Mom, Dad, Nita and me, when we moved out of the house to a farm near Lodi, about eight miles north of Stockton. Uncle Ed, who bought the house from my parents when Dad went bankrupt, was living in a bedroom in the converted garage. He rented the main part of the house to a friend and his family and continued to live in the garage. That arrangement was short lived.

On March 4, 1950, Uncle Ed married a former classmate at Ososi High School, Enes Boscariol, who came for a short visit to the Stockton area with my Aunt Helen, the oldest of my Dad’s sisters. I remember that visit very well. Enes had been an Army nurse during the war, stationed on a hospital ship that operated out of a port in Mexico. I liked her, found her very interesting. What made that visit truly memorable, though, was the romance that grew out of it. Uncle Ed had an appendix attack while she was there. By the time he left the hospital after his emergency surgery they were engaged. The following March they married and moved into the house on Coronado Avenue—the main bedroom, not the garage. This would be their home for the next eleven years. All three of their children—Michael, Barbara and John—were born there. When they left, Uncle Ed had graduated from the University of the Pacific and had a position teaching fifth grade at an elementary school about halfway between Stockton and Lodi, a job he would keep for the rest of his working life.

In October of last year I posted a chapter on this blog about the post-WWII years. It was mainly set in the house on Coronado Avenue. Soon after, I received the following email from my cousin Barbara Willems Albert:

“Wow! I grew up in this house at 3307 Coronado Ave. We moved to Lodi just a couple of weeks before I turned eight. I could climb every one of those walnut trees your dad planted before we moved. There was one in the sandbox right out the back door that had a branch I could ride like a horse. I climbed the slide to wave at the California Zephyr going past the house. I put my feet in the mud made by the furrow under the grape arbor in the back of the back yard. Bootsie, our dog, and I would make caves in the honeysuckle along the fence. The oleander in the front yard was huge. I learned to ride a bike in the curved driveway. I ate dog food in the shed in the backyard. My brothers and I shared a bedroom. John slept in the crib. Quite a walk in your footsteps after you left.”

I knew that Barbara had spent a significant amount of her childhood in the same house I had lived in, but had not thought much about it. She is much younger, and my family moved from California to Phoenix right around the time she was born. I can remember seeing her only once when she was growing up. She was simply one of my many younger cousins. The first time I actually had a conversation with her was when she spent the night with me while on a college choir tour. It wasn’t until I got the email above that it hit me about the connection the house on Coronado created between us. We had slept in the same bedroom, played in the same yard.  I was fascinated by her description of the yard.  I had known a naked, sun baked yard; she described one lush with vegetation and shade. I asked her if she would write more about her memories and let me post them here in the blog. Below is the piece she sent me:

“3307 Coronado Avenue, Stockton, California. This was my first address. I remember sitting at the kitchen table on the bench my father made. The dishes were white with a pretty green trim. My back was to the window that opened to the backyard. The kitchen door opened to the service porch and garage.

I often played on the front porch. It was two steps up, I think. One side of it was a bedroom wall, one side had the front door, and one was open to the big beautiful camellias. They were under the big bay/bow living room window. When they bloomed there were perfectly formed rose pink blossoms and blooms. My father would feed them with fish emulsion, and it stank after he did that–but the results were worth it. Mother would float a blossom in a bowl.

I played with my stuffed animals, and sometime Bootsie, our dog, would play with me on the porch. Coronado Ave was a quiet neighborhood street bordered by the railroad track in back and Alpine Ave on one side with a neighbor on the other. A huge hedge of oleanders divided us from the neighbors. There was one girl about my age on our street—and her older sister. The children—mostly boys—played outside until the streetlights came on.

I remember our house was white with dark brown trim. It had one bathroom and two bedrooms. The living room faced the street. There was a window over the kitchen sink and one where the table was set.

I remember the walnut tree in the middle of the sandbox. One branch served as a horse in my imagination. The honeysuckle hedge along the Alpine Ave side of the yard provided blooms with nectar to carefully savor. Walnuts were plentiful so Bootsie would crack them for me. After I finished opening them, we’ share the meat. Blackberries made a sweet, sticky dessert. These were sometimes eaten with the walnuts or after the dog food. A brother (John I think) and I would climb up on the bench in the tool shed to get food out of the bag. We’d share with Bootsie too.

My grandfather, on my mother’s side, gave me an orange tree. Mike got a grapefruit. They were planted on the Alpine Ave side of the house. I was very disappointed I couldn’t take mine when we moved to Lodi.

The California Zephyr fascinated me. I would wave to the engineer and caboose person from the top of the tall slide in the “way back” of the yard—where the grape harbor (Thompsons) and berries were. I could see the white tablecloth and silver vase with a single red rose on each table in the dining car.  Never got to ride the Zephyr but have ridden Amtrak many times—locally as well as out of state and overnight. Wonder if the Zephyr stirred me to a love of trains? I do remember taking my mother into Stockton to board the train for San Francisco to visit her sister and her sister’s husband. She was very dressed up—broad-brimmed black velvet hat and all. She looked beautiful.

John started kindergarten with a black eye/cut lip—can’t remember which—because he fell out of his bed, a crib. There wasn’t enough room for three beds. That’s one of the reasons we moved.

We drove to church in Lodi every Sunday morning and evening. Sometimes we caught glimpses of the drive-in movies along Wilson Way on our way home in the evenings.  Never got to watch all of Disney on Sunday evenings—big reason I never saw all of the Wizard of Oz  until I was an adult. That’s another reason we moved to Lodi–the church [Lodi Mennonite Brethren].

I remember going to my father’s graduation from the University of the Pacific. He was a truck driver until then. After that he was a teacher. My mother worked full time so he could go to college full time.

The yard was beautifully green in spring and summer. It was wilder in the “way back” but still respectfully kept. The camellias in front were between the house and sidewalk from driveway to front door. There was a curved driveway in front of the house that did not interfere with the two big trees near the sidewalk by the street. It was good for learning to ride a bicycle. My first bicycle was a Schwinn, white with robin’s egg blue pinstripes. It was single speed with rear foot brakes. Mike, I think, crashed into one of the big trees when he was learning to ride. Neither the bike nor he was hurt beyond repair.

We moved to Lodi in September before my eighth birthday. I could climb every one of the eight walnut trees in the yard before we did.”

The photo below was taken on the only occasion I remember seeing my cousin Barbara when she was little: our grandparents’ 50th Anniversary Celebration. Barbara is the little girl with brown hair and bangs in the second row. Michael is on her left, John is in front of her. I am in the back row holding a baby (my daughter Beni). 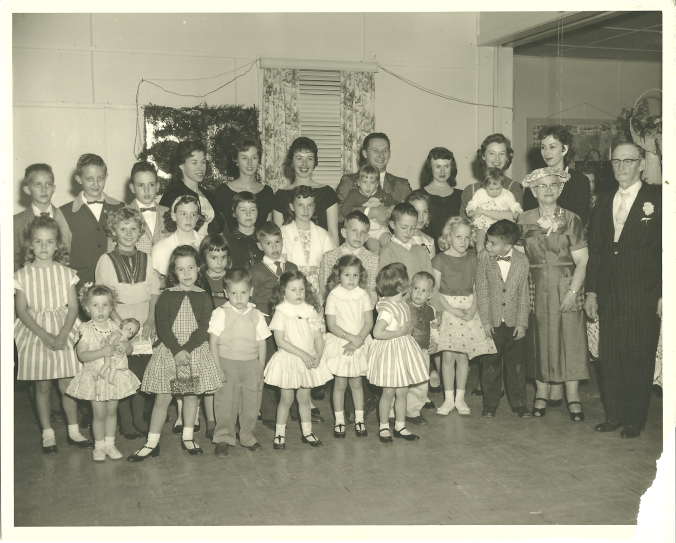 Jacob C. & Lena Zimmerman Willems and most of their grandchildren. February 1959

2 thoughts on “Epilogue: The House on Coronado Avenue”