On September 7, 1955, I flew from Phoenix, Arizona to Tokyo Japan. I went there to marry a young airman I had met in the summer of 1954, just before his departure for the Far East. We were both very young. Ben was nineteen at the time of our marriage; I was seventeen. Memories of that time have been with me all this fall, starting on a rainy day this last September. Below is the outcome of that work of memory:

It was raining when I got to Tokyo. September is the rainy season in Japan, and the rain continued all the rest of the month. Streets filled with puddles, people walking with umbrellas slanted to keep the rain out of their faces, leather shoes soaked, high wooden geta clopping on the pavement keeping wearers’ tabi-clad feet above the puddles. Geta, such practical footwear for people in a rainy climate.

September rain wasn’t cold. The temperature must have been in the low 70s, but the rain was steady, the days grey, our house and bedding damp. Ben and I had no car. We walked into the village to catch the train if we wanted to go into the city, walked to the air base to shop at the commissary to buy groceries, caught a tiny taxi to carry us and our sacks of food back to our house. Ben had a bicycle he used to ride to and from his work as an aircraft mechanic, riding in each morning and returning in the evening wet, tired and hungry.

Ben had a bicycle, but I did not have one. I knew how to ride a bike, but for some reason we never even thought of buying me a bike as well. Curious. Why I wonder? Money, probably. We had so little of it. Ben was only an airman second class, and even with my allotment our budget was very, very tight. Almost all our income went for absolute necessities—rent, food, utilities. Everything else fell into the category of luxury.

Unpainted wooden houses and open front shops, a produce market with enormous cabbages and carrots, slender eggplants, wooden half-barrels of huge, brined bamboo shoots. An open-front fish shop with tubs of clams and trays of silvery fish of various sizes. And octopus—tiny whole squid; big red tentacles from what looked like huge octopus. Many small open-front shops: a tiny shop with a variety dishes and bowls of various sizes—intriguing little saucers and cups in pretty patterns I longed to buy for the daughter I wanted to have; a bread shop with long, square-shaped loaves, delicious fine textured white bread unlike any bread I’d ever had before. Did it have rice flour in it?

There were enclosed ships, too: a stationery shop with watercolors and brushes and lovely paper of every kind; a fabric shop with bolts of beautiful silks as well as cottons and wools. The fabric came in a narrower width than any I had ever seen in the States, a width just right for  making kimonos, a width that made side-cuts unnecessary. Very practical. Here, too, there was much I wanted to buy, and eventually was able to—not the expensive silks, but inexpensive cotton to make curtains for the windows in the little house we rented.

Everything was damp in that mild, wet rainy season. Salt and sugar turned into hard lumps in their containers. Everything leather grew furry with blue mold if not brushed every day. Coats and jackets, too, needed to be brushed daily—not just those wet from wearing in the rain. Clothes hanging in the closet grew mold if not frequently aired and brushed.

In early October rain gave way to clear blue sky and temperatures just right for walking. Every Saturday and Sunday Ben and I would set out from our house in the small village of Fussa and just wander wherever our curiosity took us. Where we lived was considered part of Tokyo, but it was definitely on the rural edge. Our feet took us through bamboo forests, and farm land, past big old two story farm houses with quilts hung out to air from upper story windows. Everything was green and lush, beautiful. We would walk all day long, registering twenty miles a day on Ben’s pedometer, never afraid of getting lost, confident we could find our way back to Fussa and the footpath beside a small, rock-lined water channel that took us to our little house.

U.S servicemen were required to live in base approved housing, which meant having running water, a western toilet and adequate sanitation. We found our house through the base housing office, and when we went to look at it were delighted by what we saw. It met base requirements, but was still very much a traditional Japanese house, part of a family compound surrounded by trees in a neighborhood that looked like a scene from a woodblock print.

Entry into our house was through pebbled glass sliding doors that opened into a cement-floored entry. About three feet deep and eight feet long, it had a long, polished wood step in front of sliding shoji screens. This was a space for taking off street shoes and putting on slippers before stepping into the tatami mat main room. To the left was the bedroom, on the right behind a shoji screen, a little kitchen. A band of windows over the kitchen sink and drain board and a big window that went almost to the floor in the bedroom were the main source of daylight. Behind the kitchen, accessed through a western-style door in the main room, was a tile-floored bathroom with a tiled bathtub. The main room had no windows of its own, just the shoji screen into the entry. Its light was borrowed from the kitchen and bedroom windows. Even though the main room had little natural light, we liked the look of the shoji screens and tatami mat floors, the polished wood of the bedroom floor. We also liked the entry, approved of not wearing shoes in the house.

The simplicity of those empty rooms appealed to me. I found I liked the Japanese aesthetic. However, there was a problem. Ben’s and my idea of comfort was still western. We wanted western furniture—sofa, chairs, a table where we could sit and eat. The base would provide that furniture for us, but that furniture would ruin the tatami mat. The solution, a room-sized rug, also loaned from the base. Royal blue, it filled the main room, completely covering the straw tatami mats. Another concession to our western notion of comfort—an ugly black oil stove that needed to be placed on a wide box of sand to insulate it from the rug and the straw mats underneath it. Gone was the beautiful Japanese simplicity.

Our first Christmas together was a big event for us. Even though we were in a foreign country, away from family and all that was familiar , we wanted to have a real Christmas. The first thing was buying presents to send home to our parents and siblings. Packages had to get into the mail very early, early November if my memory is correct. Packages needed to travel by ship, military transport. Letters and cards could travel airmail and be sent later.

Buying the presents was fun. We loved looking through the small shops just outside the base. The prices were so cheap—cultured pearl rings in sterling silver settings, enameled silver necklaces and earrings—all for just a dollar or two. Other beautiful things were in that same price range—fine silk embroideries, hand carved wood figurines, framed wood mosaics to hang on the wall as well as items from ordinary Japanese life that attracted us—beautiful fans, interesting pieces of pottery, silk scarves, traditional Japanese dolls. Even with our small income, we could buy beautiful, interesting gifts. The hard part was having to wait such a long time to hear how our family liked the presents, wished we could be there when they opened the packages.

After the gifts were wrapped and shipped, it was time to turn to our own celebration. First thing: fruitcake. We both liked it and wanted to make the kind we couldn’t in the teetotaler homes we grew up in—fruitcake soaked in bourbon. Neither of us had ever tasted fruitcake that had any alcoholic beverage in it, but it sounded good. We wanted to try it so checked a cookbook out of the base library, perused the recipes and chose two that looked particularly good—a dark one and a light one. We then went shopping in the commissary on base and bought candied fruits and nuts, everything we needed. We then took it home, mixed up the batter for the two cakes and baked them one at a time in the little oven that we placed on one of the burners of our two-burner propane stove that sat on a counter in our tiny kitchen. After the cakes were baked we poured bourbon over them, wrapped them in cheesecloth and placed them in a metal container to age.

Next on the list was buying a tree and decorations to put on it. Japanese merchants were well aware that Christmas was an important holiday for Americans. The small shops that clustered around the main gate at the base were filled with tinsel garlands, Christmas lights, shiny ornaments of all shapes and sizes. There were even Christmas tree lots. We had been shopping and bringing home ornaments on our frequent walks to the base, and now it was time to buy the tree itself. The tree in the photo below is not tiny. How did we get it home? Did we put it on top of one of the tiny taxis? Did a friend with a car help us? That memory is gone. That we did get a tree is certain. The photo Ben took with the time delay on his camera is confirmation. 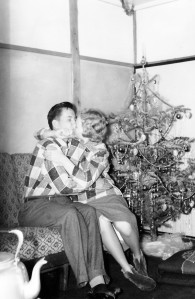 The teakettle in the bottom left corner sat on the oil drum stove.

The matching shirts Ben and I are wearing in this photo were made by my mother, her Christmas gift to us. We must have gotten other gifts, but that is the only family gift I can remember. There was, however, another gift, one that came as a complete and delightful surprise—a good-sized cardboard box  filled with coffee cans of homemade cookies surrounded by loose, unshelled walnuts used to hold the cans firmly in place during shipping. Who sent it; how we happened to get it, I don’t know. It was likely sent as part of a mass shipment put together by a church group or service club—likely from California given the walnuts. It was such a treat. We loved the cookies, and the walnuts were a treasure to be used for future baking, an important recreational activity for us..

The fruitcake, though, was a real disappointment. When we opened the containers just before Christmas and unwrapped the cheese cloth, sliced and took a bite, it tasted moldy and sour, almost rotten. We would make fruitcake in the future, delicious fruitcake, but that was our last attempt at long aging and soaking fruitcakes in bourbon or any other alcoholic beverage.