My father insisted that Ben and I get married the day I arrived in Tokyo.  The wedding was to take place in the chapel at Yakota Air Force Base where Ben was stationed.  Even though the base chaplain and his wife wrote to my parents extending an invitation for me to stay with them the night I arrived, Dad refused to be persuaded, refused to hear any logic.  I must get married the day I got to Tokyo—that stubborn demand made a lot of trouble for a lot of people, people who had never met me,  lovely generous people who helped Ben take care of all the details that even a small wedding requires.

The plane was a couple of hours late, maybe more.  I’m not sure why.  I just remember the plane circling Tokyo over and over.  I think it was about 1:30 in the afternoon when the plane finally set down on the runway and rolled to a stop. I walked through the door of the airplane and climbed down the portable stairs onto the tarmac then followed the other passengers to a low, wooden terminal that looked like a converted military building.  Inside I joined a long line of people that took me to a table where uniformed Japanese men asked questions I couldn’t understand even though they were apparently speaking English.  I asked, “What?” over and over, finally making guesses about what they were asking, embarrassed because I was holding up the line, anxious because the plane was late.  I knew that Ben was probably frantic, worried about all we had to do before the wedding ceremony at the chapel that evening.

Somehow I got through the lines and found Ben in the crowd of people.  We probably kissed, but there was no passionate embrace.  I was numb, trying to take in all that was happening, my mind working overtime to absorb everything, and Ben, anxious from the long wait, was worried about getting to the American embassy for the civil ceremony necessary to to make our out-of-country marriage legal.  After my passport was amended to show my change of status we then had to drive to a Japanese office to have my visa amended.  Only after all this was done could we proceed to our chapel wedding.

Someone was with Ben, someone with a car who knew Tokyo and its streets.  It may have been Ben’s best man, Don Askew, or it may have been an Air Force buddy with a base car.  I’m not sure.  What I do remember is the rain, steady hard rain, narrow streets that took us onto the wide streets in the heart of Tokyo where small cars darted crazily every which way, like bumper cars at carnival.  The drive from the airport into city had been long, and when we finally got to the U S Embassy, we dashed out of the car and into the building to look for the correct office, then sat and waited to be called into an office, then sat and waited to go into another office.  When that was all accomplished, we rushed out to the car for the drive to the appropriate Japanese offices.   All of this took time, a lot of time, and all of it meant getting in and out of the car in heavy rain.  I had no umbrella, and though I tried to protect my hair as best I could, the beautiful, smooth hairdo I’d gotten in Los Angeles reverted to its natural tight curls long before we were on the road for the two hour drive to Yakota Air Force Base where people were waiting for Ben and me so they could begin the wedding ceremony—waiting with no idea how long they would have to wait.

We arrived two hours after the wedding was scheduled to start.  It was dark, still raining hard, the buildings on the air base barely visible through the wet windows of the car.  The chapel was in the basement of a building I could barely see as we ran from the car to the covered stairs that opened into the foyer.  A long table with a wedding cake, punch bowl and cups was set in the middle of the room.   Off to the side was the door into the chaplain’s office.  This was my changing room, and I was relieved to see an ironing board had been set up.  Getting my dress pressed had been a big concern.  It was crystal taffeta, beautiful crisp material—yards and yards of it, and I knew it would have deep creases from being packed in a very full suitcase.  There were women in the room to help me get ready.  One of them pressed the dress while I tried to do something with my hair—no portable hair dryers or curling irons back then. Finally accepting that I’d done all I could do with it, I put on my dress and picked up my bouquet, left the office and took the arm of my escort, a young lieutenant who was part of the chapel community, and walked into the room where people were seated, waiting for me to walk through the door.

It was not a beautiful space, simply a make-do basement room with low ceilings, bare cement floors and no windows.  But the rough utility of the room had been softened by candles and flowers, bronze and rust chrysanthemums, fall colors echoed in my attendants’ dresses.  I felt no disappointment about my wedding taking place in such a plain, rough space.  I simply felt grateful to all these people who had made so much effort on by behalf.  Walking into the chapel on the arm of the handsome lieutenant, I felt proud and almost beautiful.

Looking down the aisle at Ben standing with his best man in front of the platform, I did feel a tinge of misgiving. He looked as unfamiliar as he had when I saw him on the observation deck at the Tokyo airport. I remember no fear, though, no panicked desire to jump off the conveyor belt I’d set in motion when I wrote to Ben telling him that I would be willing to come to Japan to marry him. What I remember is acceptance: I was here; this was my new life. But it was more than acceptance. There was curiosity and anticipation. I was eager to see what lay ahead.

No, Ben was not the person I had built up in my head during the year we were apart. I had begun to see that, but I also knew that he really wanted this marriage. I would make it work.

About three months after this was taken, the young lieutenant was killed in the crash of a plane on which he was navigator.

The pretty, pregnant woman is the young lieutenant’s wife, 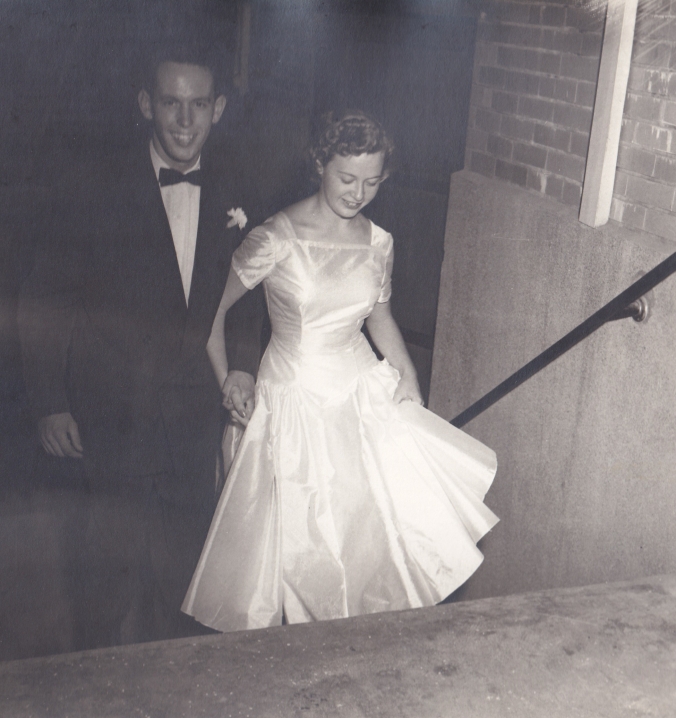 Leaving the chapel. I designed this dress; my mother made it.