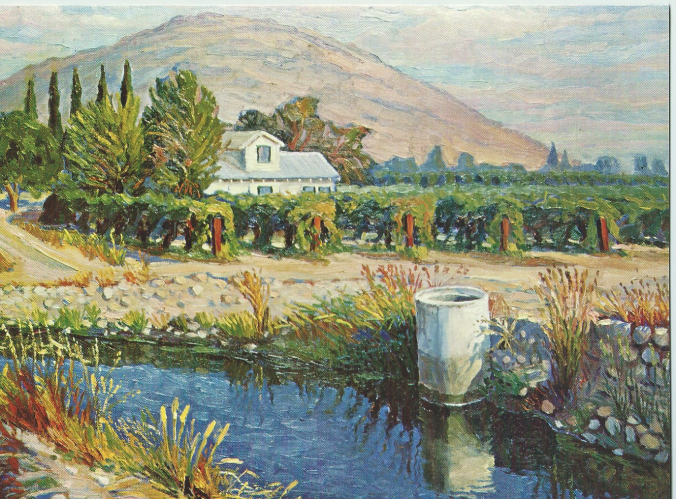 “The Farm on Anadale Road.” Painting by Paul A. Buxman, used with permission.   To see more paintings, click: http://www.shinnphoto.com/Paul-Buxman/

Reedley was a very young town when the first Mennonites arrived in 1905, a railroad town built on the banks of the Kings River close by the high Sierras about thirty miles southeast of the city of Fresno in the southern half of California’s Great Central Valley. What brought both the railroad and the Mennonites to that place was the completion in 1884 of an irrigation system that diverted water from the Kings River out onto the adjoining land, an irrigation system that would make that area some of the most productive agricultural land in the world

Before the building of the irrigation system the river had been wild, a torrent of water that tumbled and boiled out of the high Sierras onto the open plain. During the spring melt the river overflowed its banks, spreading widely over the land as it traveled its short path down to the tule covered basin of the valley floor. For most of the year, though, the river watered only the marshes in the lowlands and the narrow ribbon of green that bordered the river channel. The only plants that could grow on the arid plain beyond the river’s edge were drought tolerant perennials that could send roots deep down into the sub-surface ground water, or annuals that could take advantage of the winter rains then lie dormant during the long, dry hot months.

The native plants had once supported huge herds of deer, elk and pronghorn antelope. For the Wechikit tribe of Yokut people who lived on the land where Reedley would later be built, the land was an abundant place—large mammals for meat on the plain and on the Valley bottom a great shallow lake that was home to beaver, turtles, ducks and other water fowl. Great flocks of geese and ducks descended on the lake to feed during the spring and fall migrations, and salmon from the Pacific Ocean worked their way through the tules to their spawning grounds in the spring. The Wechikit and other neighboring tribes moved easily between the foothills of the Sierra and the lake-filled valley floor, following the animals, taking advantage of the seasons. It was a good life, one that rested easily on the land, one that had been sustained generation after generation.

What the Mennonites who arrived in Reedley in 1905 saw was a very different landscape. Cattle had replaced deer, elk and pronghorns; wheat and European weeds had replaced most of the native perennials and annuals. The Yokut people were long gone. Decimated by European diseases—small pox, measles, cholera, syphilis, they had been hunted, hounded, murdered first by Spanish and Mexican soldiers then by Yankees and Southerners from the lands east of the Rocky Mountains who saw the Great Valley as “empty land”—land they could claim for their own, settle and exploit. By 1855, when James Smith established a ferry and hotel on the high east bank of the Kings River where Reedley now stands, the conquest of the Yokut tribes was almost complete.

The vast Valley was now open for the taking. A land grab began with ambitious, aggressive men staking out huge tracts of land. The Valley became a land of enormous ranches run by a few powerful, wealthy men. In 1857 the land along the banks of the Kings River became part of the “76 Ranch,” so named because it covered 76 sections—76 square miles, a total of 48,640 acres.

When first created those ranches were part of an unfenced open range grazed by cattle and flocks of sheep. Next came wheat, vast fields that eventually covered the east side of the Valley, fields so enormous they required huge gangs of plows and long lines of big, long-legged mules to plow them. The years when wheat ruled the land around Reedley was fairly short. In early 1880s, the leading ranchers in the area decided to finance the scheme of a civil engineer, P. Y. Baker to use the waters of the Kings River to create an irrigation system that could irrigate a tract of 30,000 acres on the left bank of the river. With irrigation the land could be broken up into smaller parcels and sold for intensive farming. The 76 Land and Water Company was formed, and by the end of 1884 the irrigation system was in place. The stage was set for a new type of settler, people who were farmers rather than ranchers.

The Southern Pacific Railroad now entered the scene, pushing its rails southwest of Fresno. In 1888 the Pacific Improvement Company, a subsidiary of the Southern Pacific, platted a town site on the east bank of the Kings River and it named “Reedley” in honor of Thomas Law Reed, a wheat rancher who had given the company half interest in 360 acres of the land where the town was to be located. Reed owned 12,000 acres between the Kings River and Smith Mountain as well as another 5,000 acres in Chowchilla, about a hundred miles up the Valley north east of Fresno. Reed not only donated the land, he built a livery stable, hotel, blacksmith shop and “sponsored the building of the United Brethren Church and the Smith Ferry School.”[ii] To develop the area around Reedley the Southern Pacific enlisted the cooperation of the Santa Fe Railroad, and it was the Santa Fe’s Immigration Department that induced the first Mennonite families to come to Reedley. The first to arrive was the family of Daniel T. and Babetta Ruth Eymann, a family of Swiss German origins who had previously lived in Kansas and Iowa. Their son J.J. Eymann became Reedley’s first mayor in 1913. The family arrived in 1903 from Upland, California where the family had briefly owned an orange grove.[iii] Many years later the Eymann’s daughter Marie wrote a description of the town she saw when she stepped down from the train:

“We arrived on the train at a little station on a hot afternoon in October, 1903. The only impressive thing in sight was a big brick hotel… We made our way on foot through the dusty streets of the forlorn looking little town. Arriving at the property our father had bought, we found two old houses that looked very much like others we had seen on our way. They were on stilts, and where paint had been used at all, it had seen many seasons. One of these was a tall two-storied, lean looking house…[that] for the present was to be our home. It was a far cry from my expectations of what our home and life in wonderful California would be. But we found Reedley a friendly little town, and we soon took on some ways of western life.”[iv]

Reedley was not the California paradise of orange trees and balmy coastal weather, nor the paradise of giant Sequoias, mountain peaks and delicious summer breezes described in the promotional literature published and distributed by the railroads and other California boosters. For nine months out of the year the town and the land around it were brown and dusty. During the long summer that began in early May and lasted well into the fall it was broiling hot. This was a town tourists passed through only of necessity, passed through as quickly as possible.

It took experienced farmers from the plains and prairie states to see this land around Reedley as a paradise, a promised land. Mennonite farmers were not looking for scenery. They were looking for farmland, and what they saw was good soil—sandy loam that is a farmer’s joy, fertile, easy to plow, well drained. And water, irrigation water they could depend upon. The system of canals and ditches that diverted the water of the Kings River and carried it out to the farm plots meant that there would be no more waiting for rains that didn’t come, no having to watch crops shrivel and dry. That dependable water turned the long, hot, rainless summer into a growing season that could last 300 days in a year. And the lack of trees, the flatness of the terrain, meant that the land could be quickly brought under cultivation. This land with its mild winters was a land that could grow almost anything, land where a farmer did not have to depend upon a single crop. It was also close to the markets of Los Angeles and San Francisco. Now was the time to buy, now while those who owned the land were eager for buyers and settlers. This was land to acquire and hold on to. Prices could only go up.

Descriptions of the land and its promise were included in letters to family and friends back home. Word quickly spread throughout the Mennonite network of churches. To these farmers of the prairies and plains this land at the base of the mountains sounded like an earthly heaven, a paradise of good soil, dependable water, mild winters. No tornados, no blizzards, no swarms of grasshoppers, no anxious watching for rain that never comes.

And they came, Mennonites from Kansas, Nebraska, Minnesota, the Dakotas and the prairie provinces of Canada. They came, and they immediately set about the business of church building. By 1909, just six years after the first Mennonites arrived, there were two Mennonite churches in town: First Mennonite Church of Reedley, organized by Daniel Eymann and other General Conference Mennonites,[v] a civic-minded group of Mennonites of mostly Swiss-German origins; and Reedley Mennonite Brethren, a Low German congregation formed in Russia that frowned on active participation in secular society. First Mennonite Church, an attractive, substantial building, is still standing, still used by the General Conference congregation. The first building erected by the Mennonite Brethren, however, one that seated 200, soon became too small. In 1913 a nursery and extra room for a Sunday school were added and the seating capacity expanded to 400. In 1919, the year my father’s family arrived, that original building had been removed and a new one constructed which seated 1200, a building that was debt-free upon its completion.[vi]

The Census of 1920 gives the population of Reedley as 2,447. Its Mennonite churches could seat almost all of that population on a single Sunday morning.

[v] The General Conference was formed in the mid-nineteenth century by Mennonites in the mid-western United States who were critical of what they saw as “the formalism, legalism, and outmoded ways of the ‘old’ church.” Historian Theron Schlabach notes that “compared to most Mennonites in America they were decidedly progressive. They supported mission, education, and Mennonite union, and they believed generally that change would bring progress.” Theron F. Schlabach,. Peace, Faith, Nation: Mennonites and Amish in Nineteenth-Century America . Scottdale, Pennsylvannia; Waterloo, Ontario: Herald Press, 1988, pp. 127, 128.

Note: To read earlier chapters, click on the desired title in the “Chapters” section of the sidebar or at the bottom of the page.

“Loretta Willems has a fascinating family history and writes of it with lovely detail, honest reflection and great beauty.” 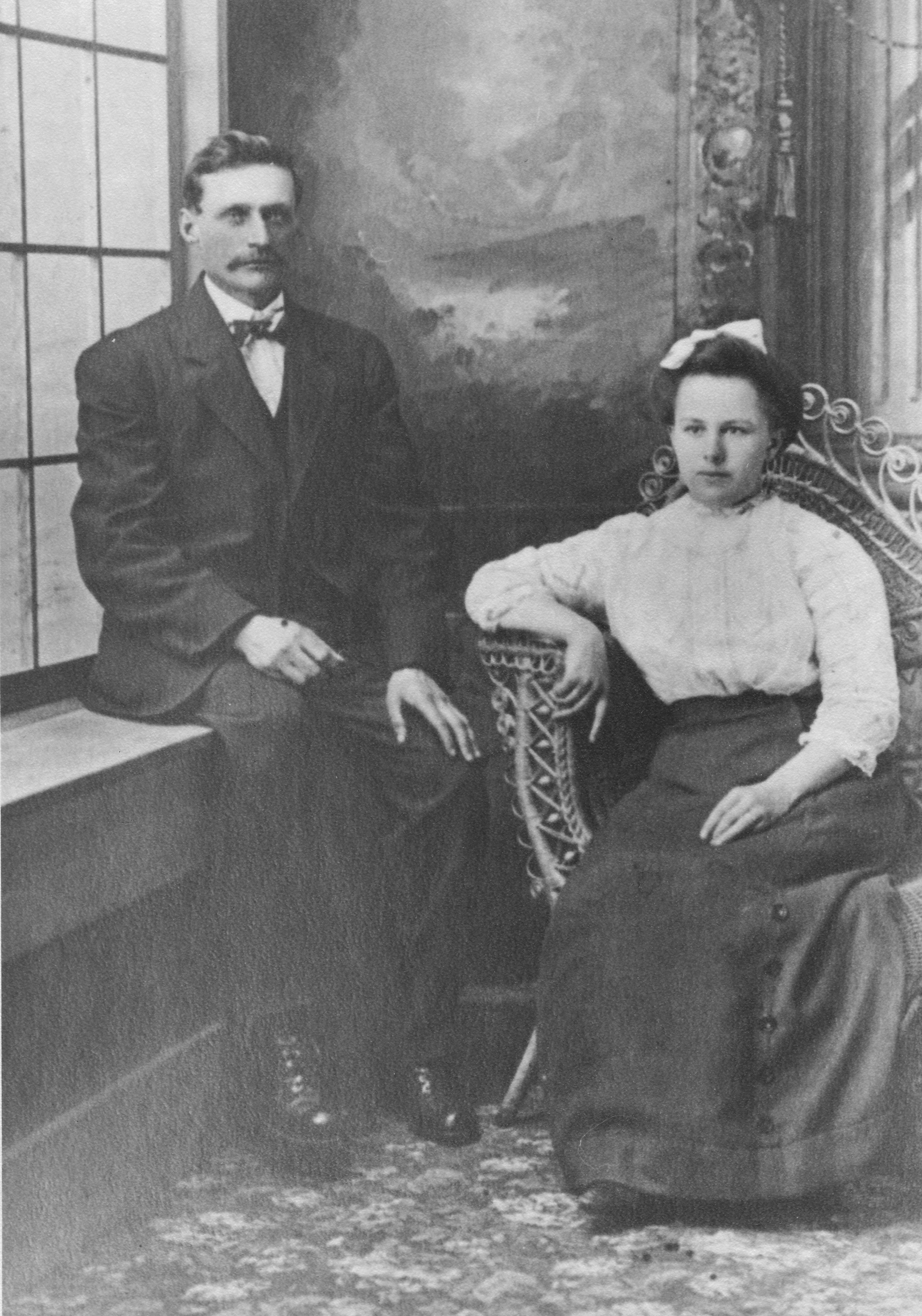